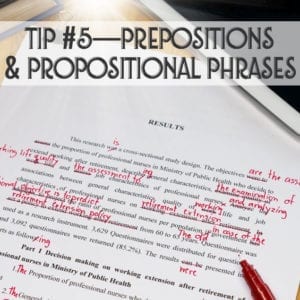 Prepositions are often awkward, confusing, and redundant. Eliminate most of them, most of the time. Do not end a sentence with a prepositional phrase or a proposition. The word “it” is the most problematic of all.

Ask yourself the question, “Do I make myself clear what “it” is in the sentence?

Pretend you are a reader and are reading the sentence for the first time, and you will find the answer to this question. Sometimes you may find it absolutely necessary, but for 95% of the time, avoid starting a sentence with “it.” “It” is often used as a connector word and becomes a crutch. Think it through…do you really need the word “it” or can you create a more succinct way to say the same thing?

Usually, the word “it” is not helpful to create exciting, engaging writing. Look for other prepositions and prepositional phrases to delete, such as “up” “to me” “end up” “clean up” “to you” “out” “over” “by” “that were” ‘which was,” “by you,” in other words, watch for useless prepositions.

Random Sample from Internet #1:
I hate wet and rainy days.

It rained a lot in 1816… a lot—like every day; the weather in Europe was abnormally wet because it rained in Switzerland on 130 out of the 183 days from April to September. If I was Mary Shelley I might decide to write a book too. After all, it was the only thing you could do without TV or anything. She said that she “passed the summer of 1816 in the environs of Geneva…we occasionally amused ourselves with some German stories of ghosts… These tales excited in us a playful desire of imitation”  So, people were stuck inside and bored. Mary Shelley decided to write a book because it was so awful outside. I can totally see her point, you know? I guess I would write a novel if there was nothing else to do. (141 words)

Imagine how slowly time might pass if trapped indoors for 130 days over six months. For many, that is exactly what occurred in 1816 in Geneva, Switzerland, with almost non-stop April-September rainfall. Picture this—those days, TV, phones, Internet, amusement parks, and other entertainment forms were not yet invented.

This half-year inside sentence could feel like solitary confinement.

At first, Author Mary Shelley thought so, too. However, rather than giving into boredom and insanity, she leveraged her warm, dry prison to entertain herself. The result was her first novel! (89 words)

Have a Dream to Publish a Book—
But Lack the Time or Know-How?

Look no further. This potent and detailed DIY publishing guide grants you the time and know-how. Learn how to self-publish a book by doing it! Once you become a published author, friends, family, and peers see you in a whole new light! This unique system propels both aspiring and seasoned authors through the digital publishing process step by step. You won’t even need your completed manuscript to start!

Those who have completed Ms. Nelson’s Courses are raving fans. See Videos Reviews & Author Library.
Hmmm … I am not quite ready—just send me the Free Self-Publishing Toolkit